The Meadows Public Park and Bruntsfield Links is a popular area for people living or working nearby, and is especially popular with runners and dog walkers. As it splits the city centre from the residential areas of Sciennes, Marchmont, and Bruntsfield it is frequently used as a short cut home for the population living in these areas and beyond. The Meadows is also used extensively throughout the Edinburgh Festival in August as a venue for many of the shows, and periodically throughout the year for other events, attracting large numbers of people to the area.

In recent months there have been a number of media reports, considering the view that the large areas of open space, dark pathways and lack of CCTV, in The Meadows and Bruntsfield Links, may mean that users feel unsafe walking through the area, and the perception of the area as a crime hotspot is widespread.

A report entitled, “Meadows Area: Safety, Security and Vandalism” was recently presented to the Executive of the Council. This report considered a number of different issues and included crime data.

During 2005 there were a total of 12 crime reports, consisting 10 Assault and Robberies and two Serious Assaults. Two of these crimes were part of the same incident, making 11separate incidents.

This suggests that suspects are mainly targeting the late night weekend foot traffic through The Meadows. Many of these victims are returning from pubs or clubs around the city centre to the mainly residential areas of Marchmont, Bruntsfield, and beyond. Pedestrians walking through the area at night after consuming alcohol may be increasing their chances of being attacked, as they are less aware of their surroundings, and therefore more vulnerable should they encounter person(s) prepared to commit crime.

Analysis of complainers suggests that the typical complainer for Assault and Robberies and Serious Assaults in The Meadows is a white male aged 21 to 25 who has been drinking.

The majority of the violent crimes recorded occurred at weekends, late on Friday or Saturday evening or in the early hours of Saturday or Sunday morning. These times coincide with when police resources are in high demand and deployed across busy city centre areas including , Grassmarket and the Cowgate.

In acknowledging the concerns regarding The Meadows area, the following police and council resources have been deployed:- 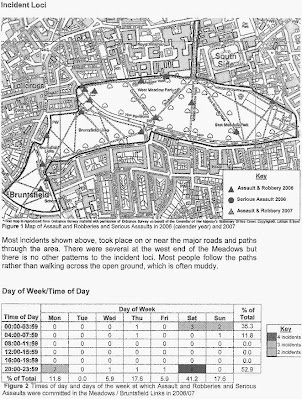 The following report has been produced to provide further information on the extent of crime in The Meadows and Bruntsfield Links area.

Crimes have been searched on the Police OSS system from 01/04/06 to 31/03/07, and the corresponding dates for the previous three years. Please note that since the searches were conducted on 05/03/07, the figures for 2006-7 will be slightly incomplete.

The loci of the crimes and incidents are the following ; Bruntsfield Links; The Meadows (including the walkways which go through The Meadows, but not the surrounding streets). 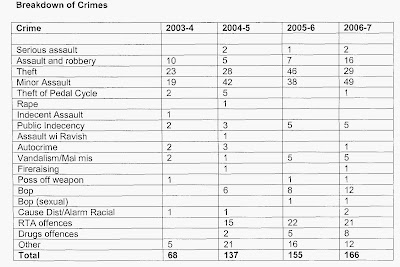 The number of crimes has risen year-by-year since 2003.

Part of the reason for the substantial increase in crimes from 2003-4 to the following years was that prior to this, crime reports were not routinely input for breach of the peace or minor RTA offences.

The following table shows the number of Captor incidents over the past three years (please note that we do not have information for 2003). The number of calls has gradually increased.

The above table shows that solvency has progressively increased since 2003.

It should be noted that the solvency figure for 2006-7 will also rise as investigations are concluded.

The following crime types feature significantly and therefore recent crimes (2006-7) will be discussed in greater detail:

There were 16 assaults and robberies in The Meadows this fiscal year. This is the highest figure since 2003, and an increase of 9 crimes since last year. Three of these have been solved to date. 5 of the crimes took place in Bruntsfield Links, and the remaining 11 occurred in the main (mainly on the various walkways).

The majority of the crimes took place on Friday or Saturday nights or in the early hours of the morning (2230-0400). The area is a shortcut from many licensed premises to residential areas, and many people walk home this way after being in pubs/clubs.

Complainers were generally aged from 18-30, as would be expected from the type of people frequenting the area at these times.

The majority of suspects were under 20, many being in their mid-teens, and the majority of crimes involved more than one suspect. There has traditionally been a problem of groups of youths frequenting The Meadows and committing assaults, thefts and robberies, although this has not been a continuous problem and appeared to lessen after initiatives in The Meadows last summer/early autumn. However, it is possible that the problem is beginning to resurface again as there has been an increase in youth calls to the area in February.

Knives were used in four of the robberies. Items stolen were any personal effects the complainer was carrying, such as wallets, bags and mobile phones.

There were 29 thefts committed in The Meadows this year, which is a decrease of 17 crimes compared to last year. There was no particular time or day pattern for thefts, although crimes are slightly higher at weekends. The vast majority of the crimes were thefts of property whilst left unattended. During the summer months The Meadows are busy with people sunbathing and playing sports, and belongings are often left unattended or near the complainer.

There were 49 minor assaults committed within The Meadows this year, which is a slight increase (of 11 crimes) compared to the previous year. Peak days for minor assaults were Friday and Saturday, and peak times were from 20.00 – 23.00.

86% of the minor assaults were committed by strangers, the nature of the crime usually being a drunken altercation or a lone person being assaulted by a stranger or a group of strangers. The most common profile for the suspect and the complainer is males in their teens or twenties.

Email ThisBlogThis!Share to TwitterShare to FacebookShare to Pinterest
Labels: Police