Comments are invited on draft guidance prepared to support local plan policy dealing with purpose-built student accommodation. When approved in its final form it will be used by the Council to assess planning applications.  Please respond by 11 May 2010 to kenneth.bowes@edinburgh.gov.uk.
Posted by ajvphilp at 21:31 2 comments:

This includes a link to their most recent newsletter (PDF).

(Unapproved) minutes of the March EACC Question Time about Policing are now available at the Edinburgh Association of Community Councils website
Posted by ajvphilp at 20:46 2 comments:

Between May and July last year City of Edinburgh Council consulted on an open space audit. They received over 900 comments in addition to almost 700 completed questionnaires and as a result of these the audit was updated and approved in its final form in December 2009. A summary of the comments will be made available at locations listed below by 2 April and an interactive online audit will be updated shortly.
The next stage involves the preparation of the Open Space Strategy itself.  The draft strategy was approved for consultation by the Council’s Policy and Strategy and Planning Committees in February 2010.  The purpose of the strategy will be to ensure that a coordinated approach is taken to meeting Edinburgh’s open space needs and protecting and developing the city’s network of open spaces. As part of this, the strategy sets out standards for the provision of different types of open space in Edinburgh.  It is also supported by 12 action plans, one for each neighbourhood partnership area.
Consultation on the draft strategy runs for a period of eight weeks from 26 March to 21 May.
During this time, comments on the draft strategy and the accompanying environmental report can be made to Finlay Martin at OpenSpaceStrategy@edinburgh.gov.uk.  Comments made will be taken into account when preparing the final strategy.
Copies of the draft strategy, action plans, list of public events and environmental report will be available at the following locations by 2 April:
In the meantime these documents are available on the Council’s website at www.edinburgh.gov.uk/openspacestrategy.
Posted by ajvphilp at 20:42 No comments:

The results of the most recent City of Edinburgh Council (CEC) Annual Neighbourhood Survey (ANS) have been reported to the Policy & Strategy Committee and are now available at Annual Neighbourhood Survey Findings 2009.  The ANS is the Council's largest survey of its residents and focuses mainly on services which support Services for Communities key objectives which are to make Edinburgh Clean, Green, Safe, Well-housed, Well-maintained, Well-informed and Well-engaged.

The Edinburgh University Students Association Community Living Guide can be found at the EUSA website .


Each Edinburgh University student with a room in an HMO should have received a copy.
Posted by ajvphilp at 20:25 No comments:

for comment: draft planning guideline on Change of Use in Residential Properties

The City of Edinburgh Council are seeking views on a draft planning guideline: Change of Use in Residential Properties.
This has been prepared to support local plan policy dealing with changes of use in residential properties.  It will replace existing guidelines on: Guest Houses (1998); Private Day Nurseries (1999); and Working from Home (2006).
When approved in its final form, the guideline will be used by the Council to assess planning applications for change of use in residential properties.
Comments are invited by Tu 13 April to rachel.gillen@edinburgh.gov.uk.
Posted by ajvphilp at 20:41 No comments:

for consultation: planning guidance on Biodiversity, and Landscape and Development

Draft planning guidance has been produced to advise on good practise when considering Biodiversity and Landscape issues. Comments are now requested on:


Please respond to naturalheritage@edinburgh.gov.uk before 23 April 2010.
Posted by ajvphilp at 20:31 No comments:

The most recent edition of the Edinburgh Community Council Newsletter (PDF) and a list of CC Office-bearers  (.doc) are now available at www.edinburgh.gov.uk/communitycouncils.
Posted by ajvphilp at 20:21 No comments:

Comments requested by 10 May: Developer Contributions for Public Realm

A Draft Developer Contributions for Public Realm Guideline  is now the subject of a consultation. This follows on from The Public Realm Strategy, which focuses on providing developers and practitioners with an understanding of the Council’s aspirations for a consistent and high quality approach to public spaces. The Public Realm Strategy states that funding for public realm projects can no longer be considered solely the responsibility of the public sector.


Whilst comments are welcome regarding any aspect of the guide, the Council would be particularly interested to hear your views regarding the following:


- Is the principle of developer contributions a good way of delivering public realm?


- Should the area of contribution be limited to the Central Area?


- Is the level of contribution acceptable?


Comments are requested by Monday 10 May 2010 to craig.wood@edinburgh.gov.uk.
Posted by ajvphilp at 20:13 No comments: 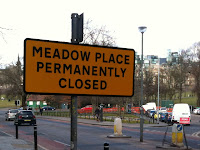 Work proceeds to close off Meadow Place and realign the cycle path running across the triangle bounded by Marchmont Road, Melville Drive and Meadow Place.
Posted by ajvphilp at 17:57 1 comment:

The next meeting of the Community Council will be held on On March 10th at 7.30pm in St Catherine’s Argyle Church Community Hall, Grange Road.

Tea/ Coffee will be available beforehand


2] Minutes of the meeting of 10th February


7] Meeting Schedule for next 12 months


Papers will be linked from this agenda as they become available
Posted by ajvphilp at 20:23 1 comment: