John Simon sent me this:


The website is at http://www.localpeopleleading.co.uk/
Posted by Hugh Leather at 10:19 No comments:

John Richmond sent this out: 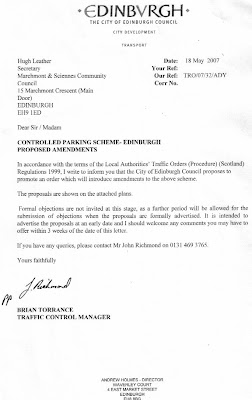 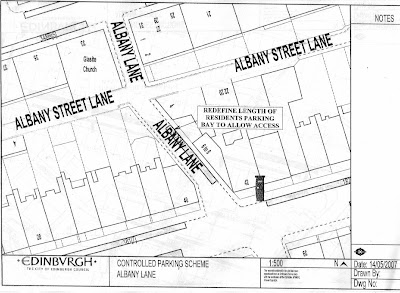 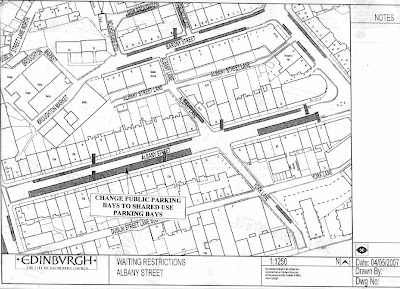 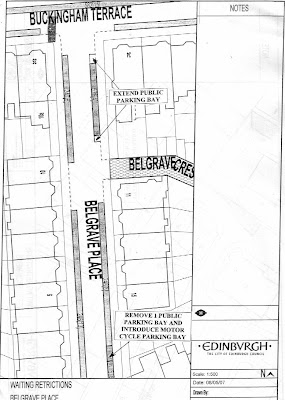 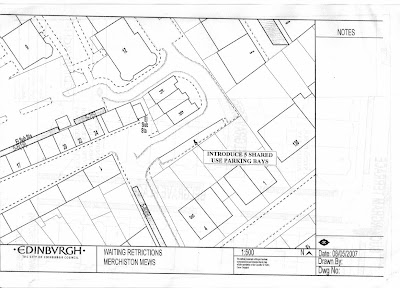 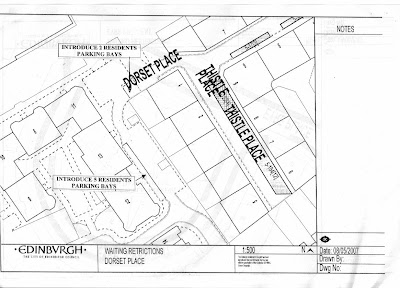 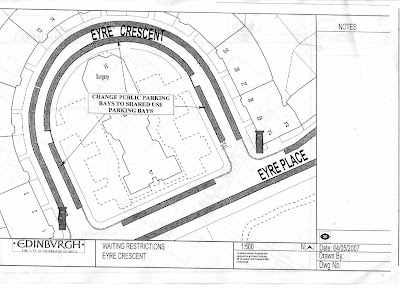 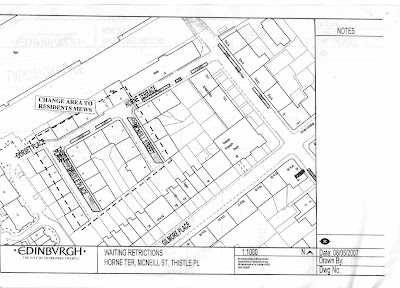 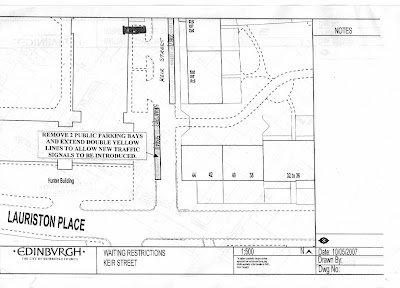 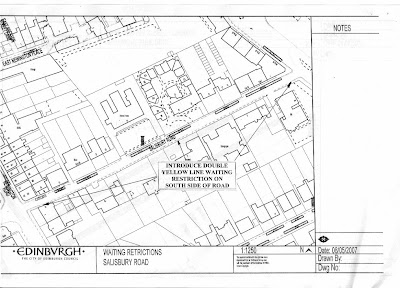 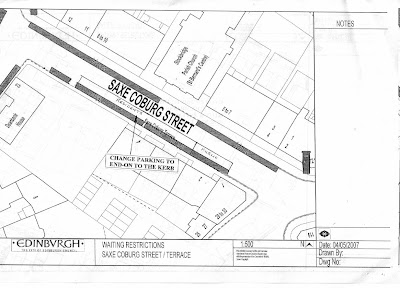 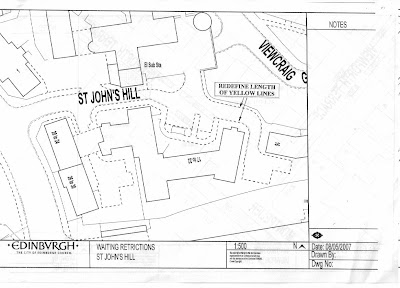 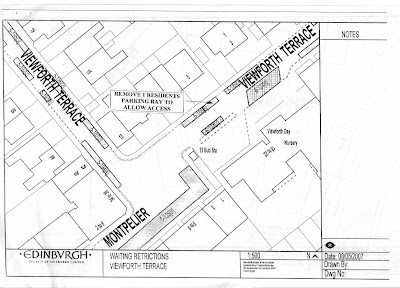 Posted by Hugh Leather at 17:23 No comments:

I received this from John Simon:


I thought that some of the keen community activists like yourself, might be interested in Community Regeneration (at least in principle), and this piece is copied from a weekly e-newsletter I get from SENSCOT (Social Enterprise Network Scotland; see http://www.senscot.net/).

Not many readers will know about the Community Voices Network (CVN) yet it is Communities Scotland’s main linkage with regeneration activists around the country. An external evaluation has recently concluded what many observers feared – that it is not very effective. From the outset CVN was designed as a ‘managed’ process – without teeth. People are not stupid – they know when something is pretend. If the Executive really wants bottom up policy (which I don’t believe) – local people on individual partnerships need to connect at regional level – and then nationally. The process is essentially bureaucratic and requires a serious secretariat to produce all the bumpf. Scotland’s activists deserve such a mechanism but the only thing that makes this work is for power and control to rest with the voluntary participants – and that’s not what our Executive does. (See for story http://www.senscot.net/view_art.php?viewid=6095).


You may recall I introduced some literature on C.V.N. to the Community Council around January I think it was (see http://www.community-voices.org.uk/).


I've also received this email (which came with this form):

The Community Voices Network is holding a National Networking event for people involved in the regeneration of their own communities on an unpaid basis.It will be held in on Tuesday 19th June (10.30am – 4pm). This is an opportunity for community–to-community networking. There will be workshops to highlight examples of good practice in community regeneration.Places are free and there is assistance with travel. Please pass this opportunity on to people busy making a difference in their communities.To book: fill out the attached booking form and return it by freepost or e-mail info@community-voices.org.ukTo find out more: call Lucy on 0141 564 7600 _____________________

Network Administrator
Community Voices Network
the voice of communities in regeneration
phone: 0141 564 7600
fax: 0141 248 3522
post: Freepost SCO 6961 G1 1BR
Reports, back issues of the newsletter, information about the network and other useful links on the Network website www.community-voices.org.uk

Posted by Hugh Leather at 04:20 No comments:

There was a meeting to discuss the future of the Meadows Festival tonight at Cameron Rose's house. This is a very brief set of minutes.

Please, if you are reading this blog and have some ideas for the festival, add a comment to this post.

Action Items
The following steps will be taken to further the project:

Attendees
Apologies
Evening News
Cameron recounted his interview with the Evening News. The article can be found here. Cameron indicated that some of comments may have been taken out of context on a slow news day.

Meetings with Potential Sponsors
Cameron has arranged a meeting with the Sick Kids tomorrow.

Susanna:
Proposed that the festival include open air theatre, possibly Shakespeare and classical music.
Linda was concerned that the fair and the rock music might interfere.
Cameron suggested that ClassicFM might do a road show.

Cameron:
Felt it was too early to decide the form of the festival

Hugh:
Presented an idea to have a Sick Kids festival. A fun run would raise money for the charity. The kids theme would be central. The festival would be much smaller, only one triangle of the Meadows to make it seem less straggly if there is medium turnout.
Linda was concerned that the fun fair needed more space.
Linda was concerned that adults would be worried about being seen as paedophiles at a child-only theme.
Linda felt that if there was a fun run participants would go home directly afterwards.

Decision:
A format for the festival was decided to be identical to the previous years', possibly with bolt on extras like small theatre.

Miscellaneous
Antonia Dickson may keep a list of volunteers.
Linda will provide a poster to Antonia.

Posted by Hugh Leather at 23:10 No comments:

Friends of the Meadows and Bruntsfield Links AGM 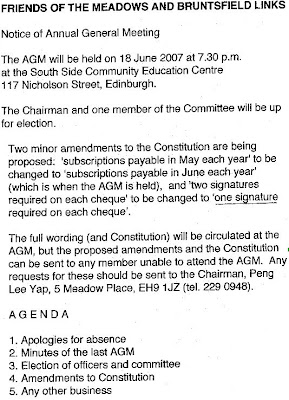 Email ThisBlogThis!Share to TwitterShare to FacebookShare to Pinterest
Labels: Agenda, Friends of the Meadows

Here is the agenda for the next meeting. If you have any comments or suggestions, please add them to this post (by clicking on the "comments" link at the bottom of the post).

This post will remain top post until the meeting is held. So, please check below it to see if there's anything newer.

The next meeting of the Community Council will be held on Wednesday 16 May 2007 at 7:30pm in St Catherine’s Argyle Church, Grange Road, Edinburgh.

MSCC now have a number of vacancies – Nominations are welcome from all members of the community – just let one of the committee know you are interested. The Representative for Neighbourhood Partnership and new Chairman must be an elected member but because there is a vacancy for an elected member, non-elected members of the community should consider whether they wish to stand for either post if they are elected as members. If you want to know more contact one of us below or check for more information on our website.

Posted by Hugh Leather at 03:30 No comments:

I've received a request for some of us to help the University with their community relations strategy.


Dear John/Hugh - my name is Rob Tomlinson, Head of Media &
Communications at the University of Edinburgh. Your contact details were
passed on to me by Dawn Ingram of Liberton CC. I am currently involved
in finalising the University's community relations strategy. As part of
this we are conducting some market research in the form of
questionnaires and/or focus groups with a variety of individuals and
organisations across the city to try and establish a better view of how
our neighbours and partners see us. I was keen to maybe try and organise
a focus group of residents' representatives who live in the area close
to major university sites such as King's Buildings or in areas where
there is a substantial student population (we have done a similar one
with residents from the Soutshide area). Would you or your colleagues be
interested in sharing your views in this way. I would need around six to
eight people and the discussion normally lasts a couple of hours. Please
let me know if this idea would be of use to you and your organisations
and whether you could provide some participants. I look forward to
hearing from you

Email ThisBlogThis!Share to TwitterShare to FacebookShare to Pinterest
Labels: University of Edinburgh

I've been sent this. 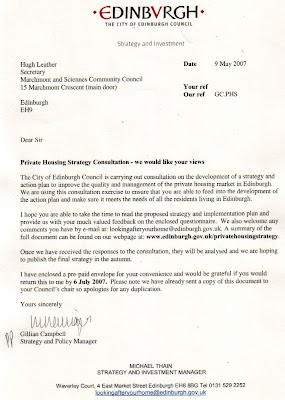 This booklet is 30 odd pages. If you would like to read it, please, email me. 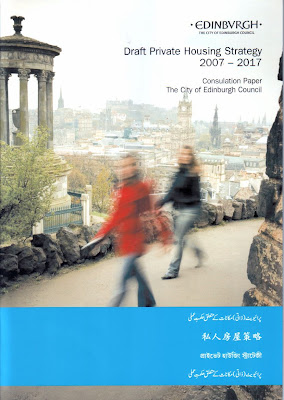 This questionnaire came too. 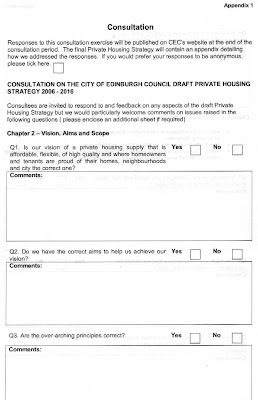 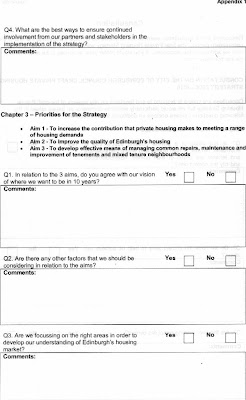 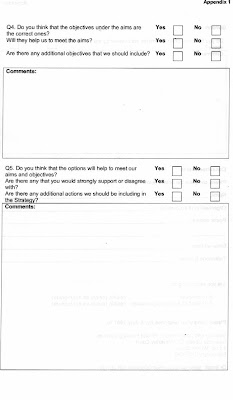 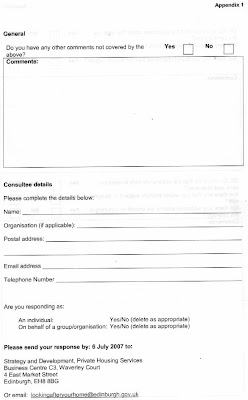 Posted by Hugh Leather at 10:58 No comments:

Email ThisBlogThis!Share to TwitterShare to FacebookShare to Pinterest
Labels: Housing

I received this letter and the poster can be found here:

The 14 - 27 May is national Foster Care Fortnight and we in Edinburgh are promoting the need for foster carers during this period.
Please find attached an electronic version of a poster/flyer promoting a foster care recruitment event next week on Thursday 18 May and the following week on Thursday 24 May 2007.
I would be grateful if you could print out a version/s and display it/them somewhere prominent in your local community. There are also radio adverts and press advertisements running between now and the event.
Many thanks for your help with this and if you require further information or would like to request a print version either in A4 or A3 size please contact Julia Sloan on 529 4499 or Clare Harris on 529 4440.
Julia Sloan
Corporate Communications
The City of Edinburgh Council
2/2 Waverley Court
4 East Market Street
Edinburgh
EH8 8BG
0131 529 4499
Posted by Hugh Leather at 10:35 No comments:

Email ThisBlogThis!Share to TwitterShare to FacebookShare to Pinterest
Labels: Children and Families

Posted by Hugh Leather at 18:42 No comments: