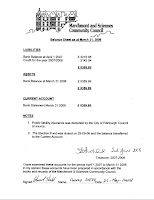 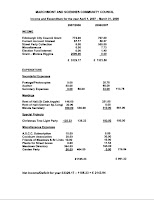 Email ThisBlogThis!Share to TwitterShare to FacebookShare to Pinterest
Labels: Accounts

The October 2008 Leaders Report can be accessed here
Oct 2008 Leaders report
Posted by SL at 11:52 No comments:

The next meeting of the Community Council will be held
On WEDNESDAY 8 OCTOBER 2008 at 7.30pm in
St Catherine’s Argyle Church Hall, Grange Road

The next meeting will be held on Wednesday 12 November.
Posted by SL at 11:52 1 comment:

Police Report
Lindsay Thomson reported that Housebreakings were down in comparison to last summer Over the four month period there had been 16 in total.
Vandalism – there had been a spate in May but decreased over the summer – only a total of 8 incidents reported in the last three months. However the community should be aware that graffiti tags were appearing on plain vans – a new trend.

Cycle thefts continue to be a problem and there will be a police presence in Freshers week to educate the students on security.

She also drew members attention to a missing person who has been seen in the area and asked anyone seeing him to get in touch with the police.

She reported that Operation Artisan over the summer was very successful. The operation meant there was a more visible police presence in George Square and the Meadows over the summer period. Officers were instructed to react in a friendly but robust way. The majority of offences were dealt with by fixed penalty notices. Despite crowds of between 14,000 and 30,000 reported incidents were down 83% and there was a marked decrease in anti social behaviour with a number of youths known to the police staying away. The police also discouraged street drinkers. The reasons for the success will be the subject of analysis and it is likely that the operation will be repeated in the future.

Susie Agnew brought the meeting up to date with the work that had been done in this regard. Considerable effort had firstly been put into making people aware of the closure and preparing style letters and distributing these. Shoppers and businesses were targeted on the first Saturday and thereafter Homeross House Homeroyal House Warrender Baths and James Gillespie parents were targeted.The second phase drew attention to the public meeting on 9 September. This was very well attending with 340 people attending including a number of people who had made a great effort to get there – despite mobility problems. The meeting however did not result in a feeling of confidence that we had made our case to keep the post office open and further work needed to be done. We required to find out whether the facts gathered by the Post Office were accurate.

A lengthy discussion followed between those present as to how best to present our case.

The following was agreed:

Cllr Mark McInnes agreed to check the number of residents in Marchmont from the voters roll and to see if he could get numbers of parking permits to demonstrate car ownership; He will also arrange for an emergency motion before the full council to try to get grant funding in place for the alterations to ensure disabled access.

Anne Laird would prepare a questionnaire which could be used to gather information to demonstrate who used the post office and for what and why their business could not be conveniently done anywhere else.


HMO Meeting/ Neighbourhood Partnership
Anne Laird reported on the meeting on 11 August. The meeting was lively and it was of concern that so many people reported problems with HMOs and with anti social behaviour. Some people reported having severe problems. A submission was made on behalf of the MSCC which dealt in depth with possible solutions to the problems and the Neighbourhood Partnership will ensure that the licensing committee consider this.

Community Health Partnership
Alastair Philp and Ruth Stroud had attended a discussion meeting of the Edinburgh Health Inequalities Standing Group to consider the priorities in Making Edinburgh Healthier. These were agreed as Food and Health, Physical Activity, Social Capital and Healthy Environments.

Ruth Stroud will continue to be involved in the South Edinburgh Patient Public Partnership forum which is being restarted.

The meeting expressed concern at the overuse of the Meadows. The use of the Meadows for prolonged periods over the festival by the Lady Boys of Bangkok and other events had caused a lot of damage to the grass which will take time to repair. The suggestion was made that big tented events should only be allowed for a week maximum before being asked to move their tents. Friends of the Meadows and Bruntsfield Links are a proactive group who have constantly highlighted the problems of overuse. However their concerns are not being addressed by the CEC. Their efforts need support and it was agreed that MSCC should raise this at the Neighbourhood Partnership.

Alastair Philp and Mark McInness will ensure this is raised at the Neighbourhood Partnership.

Rebecca will not be returning due to family commitments. The Meeting wished her well and were sorry that she would not be returning. The post will be advertised in the Meadows Directory and the Shuttle.

The meeting was reminded that the fabric carrier bags with logo were now on sale in the Marchmont shops for £1.50