Write now to say why you'll be hugely disadvantaged 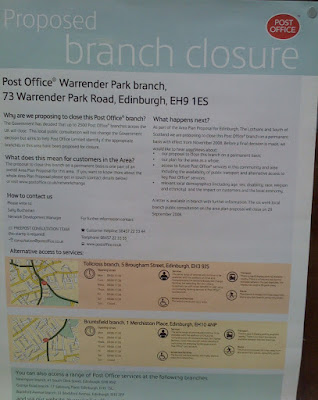 Write NOW to say why you will be disadvantaged by the closure. Sample letter below...

(This is the complete address and no stamp is required.)

(This is all you need to put on the envelope)

(“in confidence” if required)

I object to the proposed closure of the above mentioned post office. This will disadvantage me personally because

I cannot walk to the next nearest post office as it is too far and hilly.

Although the bus journey is estimated at 4 minutes to the next nearest post office at Tollcross, the bus service is half hourly and a visit to the post office could take over an hour.

There is no direct bus service to Bruntsfield Post Office.

I am unable to get to a post office during the week and rely on it being open all day Saturday.

I am elderly, do all my affairs locally as I am unable to go further. The closure of the post office will also jeopardise local shops, which form the backbone of the community on which I rely.

I do not want to take my car as parking at the nearest post office is very difficult and expensive and causes unnecessary pollution.

I bank with the Alliance and Leicester and the post office is its only outlet in this area. I do not want to carry cash for long distances.

I find the Warrender post office very convenient to the Sick Children’s Hospital.

I find this post office extremely convenient when doing the school run as it is so near the schools.

I work at home and need this post office for my business. To go further is a waste of my time.

I work in the area and this is the only post office I can reach in my lunch hour.

I am a parent of young children and returning parcels is a huge chore if not near by.

Posted by ajvphilp at 20:58 No comments: 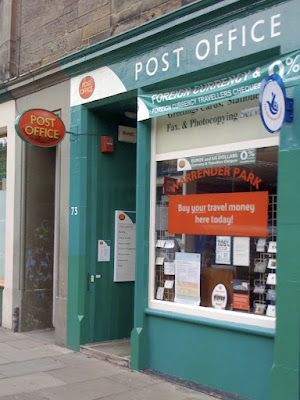 A representative of the Post Office will be present

Posted by ajvphilp at 20:55 No comments:

SOUTH CENTRAL NEIGHBOURHOOD PARTNERSHIP
MSCC represent areas which contain predominantly tenement property and are constantly being asked to help in relation to problems with HMOs.
On figures provided by the Council:
Ward 10 Southside/Newington and Ward 15 Meadows/Morningside have between them almost 54% of the total HMOs licensed in Edinburgh.
96% of these HMOs are authorised by the licensing authority
The predominance of HMOs in a tenement or area results in:
wear and tear on the property,
increased noise and disruption where people with differing lifestyles live together and
the drift of a individuals and families to other areas.
reduces the diversity of the population needed to sustain the community as a whole.
The Licensing Authority consider that their only remit is to ensure the safety of tenants. Their policy takes no account of the impact too many HMOs make on individual tenements or areas. This is completely at odds with the way they deal with any other licence application. The community have no difficulty with supporting a policy which ensures the safety of tenants and assures the quality of the accommodation. They do however have a problem with a policy which does not support diversity and sustainability in the community and continues with a policy which denies the importance of these in any community. These areas have benefited from the extra diversity and type of population which occupy HMOs and are aware that they fulfil a need for rented accommodation. However the present policy pays no heed whatsoever to controlling the proportions of HMOs in any tenement or area despite the difficulties this causes to other residents. The Community Councils feel very strongly that this policy is harming the future of their communities. As a community council we are of the view that they are failing in their duty to the community as a whole (and here I included tenants landlords and proprietors) if they do not do change their policy to use the powers they have.
We ask them to review their policy use the powers under the Housing (Scotland) Act 2006 and the The Civic Government (Scotland) Act 1982 to consider the suitability of the property and the impact of the amenity on surrounding properties when granting a licence for an HMO. They will do this in relation to any other licence they grant – why will they not use these powers in relation to HMOs. We have researched the legal issues and are in no doubt that they have the authority to do so. We also want the licensing authority to enforce the conditions attached to an HMO and prosecute where these are breached. Lack of enforcement is a major problem.
The submission which we have prepared gives the details and I ask the Partnership to use their influence to ensure that the Licensing authority give serious consideration to the issues involved and the problems caused by their present policy. The full submission is attached.
Anne Laird
Marchmont and Sciennes Community Council
Posted by SL at 17:26 No comments:

Issue 9, August 2008
Working together to improve services
Edinburgh Partnership e-News
I am delighted to advise that the Edinburgh Community Planning Partnership has been successful in securing European Structural Funding in support of key city initiatives, focussing on employability and the regeneration of our disadvantaged
communities.
With European Funds in excess of £5 million over the two year pilot period, the city will benefit from a wide range of new and additional activity. The key objective
is to balance opportunity and need by addressing entry requirements into the labour market and meeting skills shortages, resulting in increased employment and
sustainable employment.
Specific initiatives include Fire Service led training for 14 to 19 year olds, Job Brokerage programmes with city employers and clients from disadvantaged areas,
outreach work through GP surgeries and volunteering opportunities, and measures to help vulnerable groups join the workforce.
I look forward to reporting further on the impact of this Partnership effort as the 'Competitive Communities Programme' progresses.
Other major investment developments reported in this issue include the Partnership’s recent decisions on the Scottish Government’s new Fairer Scotland Fund. We find out how this will benefit the city’s most disadvantaged communities over the next three years.
These outcomes will contribute to the Single Outcome Agreement which requires a new way of working for national and local government and community planning
partners. This issue also contains:
􀂙 Interview with Board member Professor Joan K Stringer
􀂙 Local community planning’s East Neighbourhood Team
􀂙 Neighbourhood Partnership website
􀂙 Tackling crime with Neighbourhood Action Units
􀂙 Cooling down anti-social behaviour
􀂙 Post office closures update
􀂙 Edinburgh Partnership in Conference
􀂙 A City for All Ages progress
􀂙 Engaging communities
􀂙 Community planning in NHS Lothian
􀂙 Edinburgh Inspiring Volunteering Awards 2008
Councillor Jenny Dawe, Chair of the Edinburgh Partnership
www.edinburgh.gov.uk/community planning
Posted by SL at 17:00 No comments: