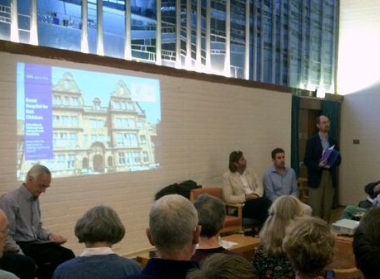 The meeting was held at the Church of the German Speaking Congregation on Tu 13 Sep starting at 19:30

Douglas Rogers welcomed around 100 people to the meeting and outlined the Agenda.  Alastair Philp added his welcome on behalf of the Marchmont & Sciennes Community Council. Ian Murray MP and Miles Briggs MSP had sent apologies. Daniel Johnson MSP and Cllr Steve Burgess were present, and Cllr Cameron Rose arrived during the meeting.

David Wood from PAS (Planning Aid for Scotland) gave a short introduction to PAS, which provides impartial advice and training on the planning process for local communities. He also spoke about how community engagement in planning can be assisted by the use of 'Charrettes' and described PAS’s Charretteplus approach.  The 'Charrette' process uses intensive community-design workshops to develop a shared vision.

Charles Campion from JTP then spoke. He outlined how the 'Charrette' process (including site visit, drop-ins and 2 days of workshops) had been used for redevelopment of a former hospital site in London. Experts had facilitated the process and when the eventual planning application was considered by the Planning Committee it was passed unanimously.

Stewart Adams from NHS Lothian then explained the approach to be taken in selling the RHSC site. The site will be marketed now (as a single site) with initial offers invited by Christmas, and final offers early in 2017. A developer will then be selected, and they will continue the planning process.  Community Engagement is starting now, with this meeting, and will continue, involving the developer when one is chosen.

Richard Slipper, from GVA James Barr (acting as planning consultant for NHS Lothian) shared the proposed plan for pre-planning activities.  He is compiling a 'position statement' that will summarise relevant planning 'facts' including what the local development plan says, constraints on the site due to listed buildings and the site being in a conservation area.  This 'position statement' will also include initial community views: to gather these there will be a public workshop in November (date to be set; involving local groups including MSCC).  The 'position statement' will help to develop a list of criteria that can be used as part of the developer selection process.

Laura Bird from Sciennes Primary Parent Council asked that the planning and engagement process considers how more playground space could be found for the school.  Perhaps by limiting traffic on Sciennes Road in front of the school to pedestrians and cyclists and enlarging the existing community woodland strip.

Then Stuart Irvin, the Minister at St Catherine's Argyle asked us to consider, as we ponder redevelopment options, the fact that the hospital has been the site of many personal tragedies as well as triumphs.  He also made a plea for affordable housing to ensure a rich mix of ages of resident.

The meeting concluded with a question and answer session, including: